I’ve been saving up for some time now for a new camera. My Pentax K10D was in need of repair with a price-tag of $300+. For that price, I may as well work towards a newer camera. To that end, I recently purchased a Pentax K-3, their newest(ish) top-of-their line DSLR. My iPhone 6 has been a wonderful companion and I have taken some great photographs with it, but it became clear that it just couldn’t quite do all that I wanted a camera to do. For example, low-light pictures were grainy, and often even otherwise sharp and well-lit photographs still seemed “flat.” Plus I had a bunch of good lenses sitting around.

But enough apologetics. Last night I finally found some time to play with the camera a bit. I’m very pleased with the results. The camera does seem to have a back-focus issue (camera focuses beyond the point it tells me it’s focussed on), which is what needed repair on my K10D, but these newer models have manual auto-focus fine-tuning built right in. So I can solve the focus issues… I just need to decide if I should nevertheless send it in while it’s still on warranty.

Anyway, after fixing the focus issues, I took some black and white shots of our cats. I’m quite pleased with the results. Pictures taken with a 50mm lens at either f1.4 or f2.0, all of them at ISO6400 (except the last, which was ISO3200). Some of them are a little darker than I’d like, but these are all unedited, other than for size (and for the camera’s own processing to b&w jpegs).

I promise I won’t turn this into a blog of cat pictures. 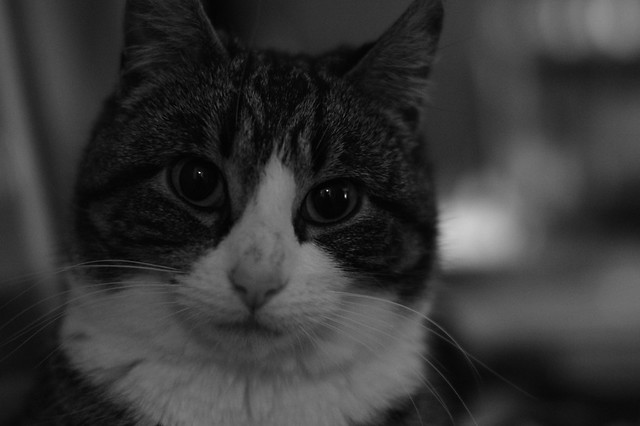 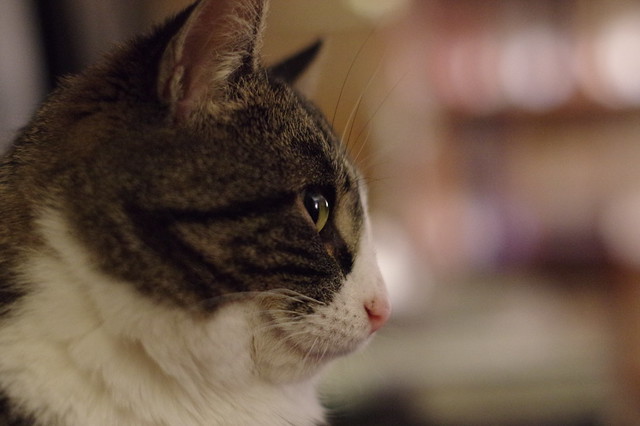 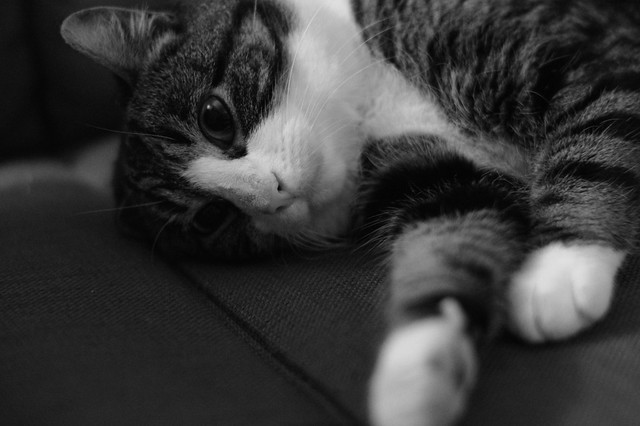 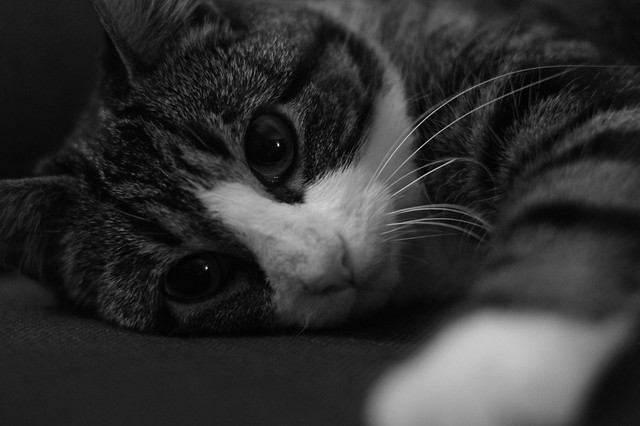 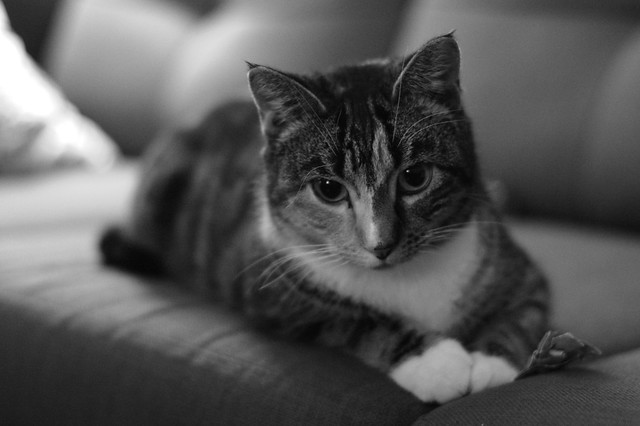 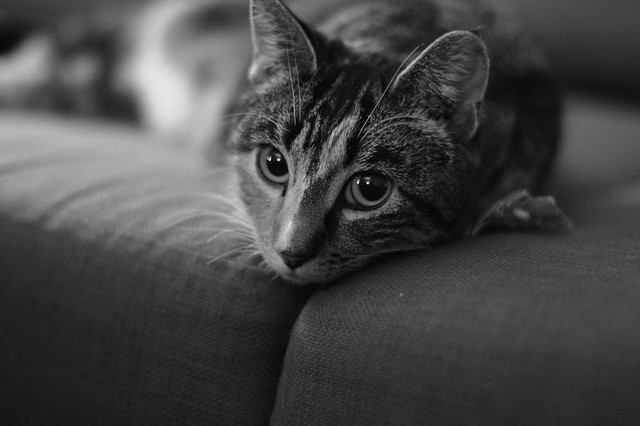 Me in my friend Derek’s lenses: 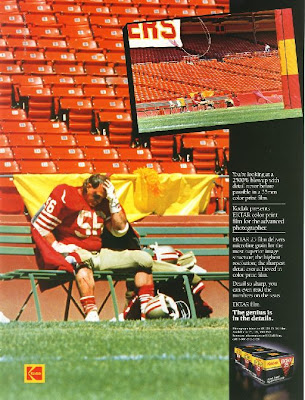 I’m still here. Just on holiday. Summerland is not as summery as it was last year.

I took this on the way somewhere in southern Manitoba: Our credit card includes a rewards system in which, after accumulating a certain number of points, you can take your pick of a gift card for a variety of businesses. Usually we just get Esso gift cards; occasionally we will get FutureShop (an electr0nics store for you non-Canadians) gift cards. Since moving to Otterburne, however, we’ve had some difficulty with the bank. For some reason they are reluctant to send our bills and statements to a box number. Somehow Dixie managed to convince the bank to send our statements to our box number, but we have not been able to convince them to send the gift cards to the same address. (Banks!)

As a result of this obstinacy, we’ve gone a year or more without claiming any of our gift cards. Then we realized, a week or two ago, that we could just use the street address for the school and still get the mail in our box. So now we’re sitting on $350.00 in FutureShop gift cards.

We chose Futureshop because we want to buy a new point-and-shoot camera for our trip to England. I’ll probably bring my Pentax DSLR, but it’s nice to have a small camera handy as well, as I’m not sure I want to carry a large camera bag everywhere I go.

The question is, which point-and-shoot camera should I buy? I did a great deal of research before buying my Pentax DSLR. It seems to me, however, that with point-and-shoot cameras it’s a bit of a crap-shoot. There is a dearth of choice and, in my experience, you cannot count on brand-name alone to make a good choice in the point-and-shoot market. Our first digital camera was a Canon. We spent a ridiculous sum of money on this basic digital camera (back when they were just becoming popular), and I was delighted to find that the results exceeded my expectations.

After a number of years that particular camera deteriorated to the point of near-uselessness. Superstore presented us with an opportunity: no tax on anything purchased on a certain day. So I went out without any research and purchased another Canon. I assumed that it being a Canon would be enough, but I was disappointed. The picture quality, among other things, was disappointing. I spent $250 on that camera, I think. Frustratingly, the $70 Samsung we bought for Madeline the following year took very good pictures–significantly better than our Canon (which is now on the fritz, too).

So, as I say, a crap shoot. I have no idea where to begin with a point-and-shoot search. No–not true. I’d like to begin here: with a Canon Powershot G11. The G11 is about as close as you can get to a DSLR without actually buying a DSLR. It gets great reviews, but it’s pricy, so we’d have to shell out a bit of our own cash.

After that, I don’t know where to go. A Canon Powershot S90? A Pentax Optio something or other? A Samsung? Maybe we should just ask Madeline if we can take hers…