I had never heard of The Waterboys until I looked into the soundtrack to Waking Ned Devine. Their wonderful song of love and longing, “Fisherman’s Blues”, opens the film. Apparently, The Waterboys were quite the pop-rock sensation in the early-mid ’80s. 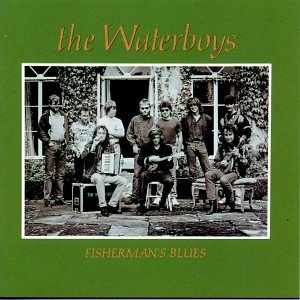 This album, also called Fisherman’s Blues, is decidedly not a pop-rock album. At least, most of it isn’t. There are a couple of songs on the album which were inexplicably included on this album, were poorly chosen, sound-wise. Overall, however, the album has a strong, celtic/Irish feel. Lots of violins and mandolins and whatnot.

I’ve mentioned before that though I have always lived in land-locked areas, a part of me feels something deeply when I’m near the sea–a kind of longing or some such. It is, perhaps, one of the reasons I love the prairies and wheat-fields that move like waves in the wind. Inland seas. But I digress. The point I’m trying to get to is that the song “Fisherman’s Blues” for some reason awakens that longing in me. I’m not sure if it’s the song itself or if it’s its association with the film Waking Ned Devine, which is set in a tiny Irish village on the sea, but that’s what it does. Plus it’s just a great song.

“We Will Not Be Lovers” and “World Party” do not, as far as I’m concerned, belong on this album. Their only connection to the feel of this album is the fact that they are heavily violinned. Sandwiched in between these two songs is “Strange Boat”, a quiet, sad ballad.

After “World Party”, all is once again well on the album. The rest of the songs sound like they may well have been played for generations in dark Irish pubs on Saturday nights, which is perfect. Some of them are a little country and always put me in mind of the Saturday night Dixie and I spent dancing polkas and chartreuses and so on under paper lights at Danceland along Manitou Lake. Others are more traditional Irish ballads and bouncy love songs with a decidedly Irish sound. It also includes an excellent cover of (Irishman) Van Morrison’s “Sweet Thing” (with a bit of the Beatles’ “Blackbird” grafted in).

It’s all very Irish, let’s say. The collector’s edition comes with a second disc of original and cover material cut from the original release. Also very Irish. Perhaps even Irisher.

Once again, a terrible review of something, by yours truly. I’m sure I haven’t sold you on the album, but you should nevertheless check it out. It’s one of my favourites. It fills me with joy and happiness. I listen to it and all’s right with the world.